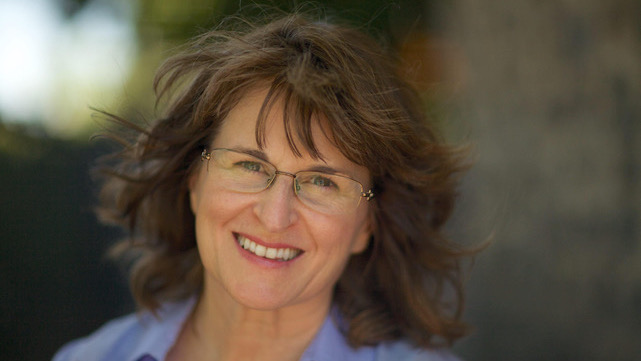 Karla McLaren, M.Ed. is an award-winning author, social science researcher, and empathy pioneer. Her lifelong work focuses on her grand unified theory of emotions, which revalues even the most “negative” emotions and opens startling new pathways into self-awareness, effective communication, and healthy empathy. She is the founder and CEO of Emotion Dynamics LLC and the developer of the Empathy Academy online learning site.

I met Karla in 2018 when I participated to her training on “Dynamic Emotional Integration”. I simply love her approach on emotions, and I am utterly convinced that an appreciative understanding and a loving handling of emotions is something that our radically transforming world needs more than ever these days.

My conversation with Karla is about the connection between transformation, comfort zone, fear and vulnerability. She shares with impressive openness her own transformation story and insights from her many years of work with emotions. Enjoy the read!

Karla, thank you for taking the time to have this conversation with me, I incredibly appreciate that. So, let’s just dive into it.

How would you describe the essence of your work?

What are these dynamics?

In fact, they are being pushed by their emotions. So, for instance, if they are feeling fear, which most people are feeling right now in the world, they don’t have any idea what to do about it. They either avoid things that they shouldn’t be avoiding or are over careful or they go and make just wild decisions, following the motto “nobody can tell me what to do”. So, there’s this beautiful emotion and this beautiful information inside emotions. And people have been learned to be afraid of it. Avoid it. Explode with it. They have never learned how to work with it.

For me transformation is a function of healing ourselves, but also healing the large issues and problems that humans have created, mostly because they don’t know how to work with their emotions. It’s the capacity to go into the deep emotions that arose in the situation and learn from them, learn how to resolve and heal the situation and then be able to go forward with new emotional resources, emotional understanding and deep emotional wisdom.

What fundamental transformation have you experienced yourself which contributes to who you are today?

When I started my career, I identified as an empath because I was very aware of emotions. And if you’re very aware of emotions and you understand them even a little bit, you can understand things about people that may be very surprising to them. They may not know that what they’re doing is so obvious. So, a lot of people thought of me as a psychic. And so that was what my early career was about, that there was something paranormal about hyper empathy. In 1997 I started writing my books.

“Emotional Genius” was one of my books that I was known for in 2001 when the World Trade Center was destroyed. I think it was a shift for everybody. Some people shifted in a really troubling direction, like our country went and destroyed the Middle East behind us. We destabilized the entire Middle East because of our inability to understand what had happened or a refusal to understand the kind of rage that would lead people to perform terrorist acts.

I was very much into “spirituality is better than anything else” at that time. I began to see, however, that our Christian beliefs and the beliefs of the people behind these attacks were all spiritual. And I realized that spirituality and religion can be just as problematic as any other aspect of human life, there isn’t anything higher or lower about spirituality and religion. So, I began to look at my own spiritual beliefs and at what I had been saying and what I had been writing, what I had been putting forward. And I realized that empathy was not a psychic skill – and that promoting that idea was irresponsible. I was feeling all of the emotions, rage and grief and depression and suicidal urge and panic and fear. I took the dive into each of these emotions and discovered that what I had been doing, what I had been saying, what I had been writing was wrong. And not only wrong but damaging to people. And so, I ended my career and pulled all the books I controlled out of out of print and went back to school to study the social sciences, to try to learn about what had happened to me and how I could have been so wrong. That was a huge transformation in my life. Then six years later, I was asked to come back and rewrite “Emotional Genius” from my current understanding. That book is “The Language of Emotions”. And that’s how my public writing career began again.

Have you ever regretted that transformational shift?

No. But it was extremely painful. And beautiful. In fact, I am relieved and grateful to have freed myself from my previous beliefs.

What would have been the price of not having done this shift?

There’s a bible saying „ For what profits a man if he gains the whole world but loses his own soul?” I would have lost my soul.

Where do you see the connection between transformation and vulnerability?

Transformation requires an ability to look at your own shadow, at the people you hate and the things you hate and see why it is that you hate them. That is an extremely vulnerable act. For me shadow work was massive because I hated scientists. I hated science. I hated people who didn’t have spiritual beliefs. I looked down on them and now I’m that person who loves science and is a scientist and a complete agnostic. I’m cool. But it is moving into the emotions that helped me make that shift.

So, what is your approach to emotions?

At Empathy Academy we are reframing the emotions away from the really damaging and dangerous ways that most of us have learned to look at them. So, we’re looking at emotions as completely necessary aspects of basic cognition, that all of them have a purpose and a value. One of the key things that we say is there’s no such thing as a negative emotion and there’s no such thing as a positive one. They are all vital parts of your cognition. They’re necessary.

Let’s have a look at fear as an ingredient of transformation. Fear doesn’t have a very good reputation in general. What is fear for you, what is its function?

I really love fear. And yes, it is one of the most hated emotions, although people hate many of the emotions. But there is a just a terrible messaging around fear. One is that fear is a sign that you don’t have courage. Excuse me, but fear is required for courage, because if you didn’t fear something, why would you need courage? Then there’s a horrible acronym for Fear, which is “false evidence appearing real”, which shows such a hatred and distrust of emotion. And if that’s how we’re raised, and most of us are, then when fear comes up, as it should, we are going to spin out. We’re not going to know what we’re doing. We’re going to make bizarre decisions and blame it on fear, instead of understanding what this emotion does and what its job is. Fear brings us instincts and intuition about the present moment. It is our awareness of what’s going on around us. A lot of people don’t understand that and what they call fear is actually anxiety or panic.

How would you make the distinction between fear, anxiety and panic?

The third emotion in this triumvirate is panic. And panic is an emotion that helps save your life. Panic is the fight, flee and freeze response to actual physical danger.

“Losing their minds” is a good keyword. Many only recognize an emotion when it is boiling up and they get overwhelmed by it. What different qualities of emotions are there?

Understanding emotions at different levels of intensity is important because, as you said, most people can only identify an emotion when it is very obvious.

This is something I noticed in children’s books. I wrote a children’s book. It’s not published yet. But I went to look at how children’s books on emotions were illustrated. And anger was like a bull with hot steam coming out of his nose. Sadness was in a corner crying its eyes out. My thought was “wow”. So, what we’re teaching children is to identify emotions only when they’re at an intensity that children may not be able to manage. Even adults in many cases can’t manage emotions at these intensities. With the bull, that’s rage. That’s not anger. The crying one in the corner, that’s grief, not sadness. Each of these more intense emotions is really necessary. But that’s not how you should teach emotions. Most kids won’t be able to manage them when they’re that intense. And that goes forward into adulthood as well, that we don’t know emotions in their soft state and what they actually do. Anger sets boundaries in its soft state. You can just say, “no, I don’t. I don’t want a piece of bread right now.” There’s a boundary. But when most people think of anger, they think of people setting boundaries with aggression and violence.

So, what are your most important 1-2 recommendations on how to handle emotions?

There’s no such thing as a negative emotion. Welcome all emotions and learn their language. They are your friends. And if you are curious for more I invite you to go to my website, where there’s lots of free information (https://karlamclaren.com).

Let’s get back to transformation. In your work, what are moments when you observe fundamental shifts happening in other people?

It’s when they can settle into their emotional responses instead of reacting, to go deeper and to ask the emotion what is happening, and why? The deeper the emotions are, the more people just avoid them, and because of that, they don’t really grow. They get old but not mature, they don’t deepen. And I find that when people can go into their emotions and ask the questions and sit with the emotions, then they can make the next steps in their lives.

In your experience, how long does it take for a transformational shift to take place?

Sometimes you’ll be working on something for three years and it won’t shift. And you just give up. But then, twenty-five minutes later, you suddenly shift for no obvious reason. There are no general rules, the main thing is to stay tuned in.

What would be the next growth step you desire for yourself?

For me, something that I’ve become aware of in this political situation we’re having in the United States is that so many of our best people went into arts and poetry and science and not a lot of them went into politics. And what I’m realizing is how important it is to have our best people in politics, because that’s where the change happens. I’m seeing so many people writing from their little houses like me about how we’re going to change the world, but I think the change needs to be political. So, for me the next step is how do I become a more political person when I’ve always looked down on it.

What do you believe in?

The healing power of nature. Are you seeing the same thing we’re seeing over here where the whole world is starting to bloom and the animals are coming out? It’s amazing.

Karla as a person: what are your likes, dislikes, how would you describe yourself?

I love laughing, I love colors and I love rainbows. And I love to see people being kind to each other.

Karla, thank you so much for your trust and openness, and all the great insights you shared. I really loved our conversation.